While speaking in assembly back in 2018 I mispronounced a word in Maori. It was a word commonly heard around the school, and my attempt in this instance was unique to say the least. I knew as I was saying it I was wrong, and moments later the giggles in the audience was more than enough to confirm. I could have corrected myself, joined in the giggle and been humble in correction, but instead I spoke louder, continued with my planned speech and spoke over the response. I felt the change in my body as I tensed up, turned red, and shrunk in embarrassment. I went on pretending nothing had happened during and after the speech, but deep down I felt the pit of shame eating me up.

On this particular day, this was the first of a double assembly – the seniors first, the juniors straight away afterwards. I had to give the speech again in only a few minutes. At this point I was internally looking for excuses. Worried that someone would challenge me on my pronunciation I had various thoughts enter my head, such as saying a different word students didn’t recognise or the difference between North and South Island dialects – anything to remove me from blame. These thoughts were in the back of my head when I found myself on stage again approaching the same word I mispronounced before. I still struggle to admit to myself what happened next, but – indeed – I doubled down and deliberately this time mispronounced the word a second time.

Why? What could I possibly be thinking? The new audience responded the same as before. Digging my heals in literally I continued the speech feeling even more shame than before. I walked away from the assembly clarifying my excuses, preparing my rebuttal, but I was never challenged. No one from either assembly mentioned it to me, and to date no one ever has. 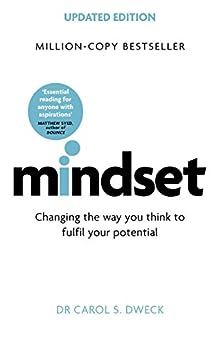 I was thinking about this episode from 2018 as I was reading Carol Dweck’s Mindset: Changing the way you think to fulfill your potential. The growth mindset has been in and out of my professional career. I’ve attended a Carol Dweck workshop that focused on the triggers of the fixed mindset and challenging these in educational contexts and associated ideas have come up in various contexts. Reading this book was a opportunity to revisit and reflect.

The episode I described above is an episode of denial. I lived in the devastation of the shame, and wallowed in the misery. I choose not to accept failure, and as a result denied myself an opportunity to learn from it. Furthermore, as a teacher I had publicly modeled denial and had missed an opportunity to teach the students about how to deal with mistakes and grow from them.

This doesn’t necessarily mean I am a fixed mindset person. Dweck talks about how we all are a combination of both, and this combination is dynamic. Recognition and understanding is key. Dweck proposes a journey to the true growth mindset as being

Thus, I think it’s important to reflect openly about our defining moments of fixed mindsets. Through doing so we can understand our triggers, develop our awareness and educate ourselves to respond differently in the future. There are many more episodes of fixed mindset thinking in my past I can interrogate – using these anecdotes honestly in the classroom is one way we can help encouraging growth mindset thinking in students.